Not only the traditional educational system but our whole culture relates to kids more as potential than actual. Beings who may want to grow up to be SOMETHING, but for the moment are by implication NOTHING.

One of the awesome things about Agile Learning Centers is that kids don’t have to wait to get real about who they are, they can start doing/being/having it now.

After going to the Museum of the Moving Image in NYC and playing these big multi-player games (meaning cabinets with controls for 8 – 10 players), they talked about them for weeks afterward. Our makerspace facilitator said, “Your know you could make your own game if you want.” And suddenly Game Team was born.
They named their game company Disgruntled Badger, and designed an Astronauts vs. Aliens game they called Galactic Nemeses. Three kids (a 15 year-old doing the graphic design and electronics of the controls, a 9 year-old programming most of the interaction/fighting, and an 8 year-old who programmed the game’s physics) built the game and launched it at a professional play testing event with lots of other NYC companies demonstrating their games at Microsoft’s fancy new Times Square offices.
They didn’t have to wait to grow up to be game designers. They can fulfill those dreams now. 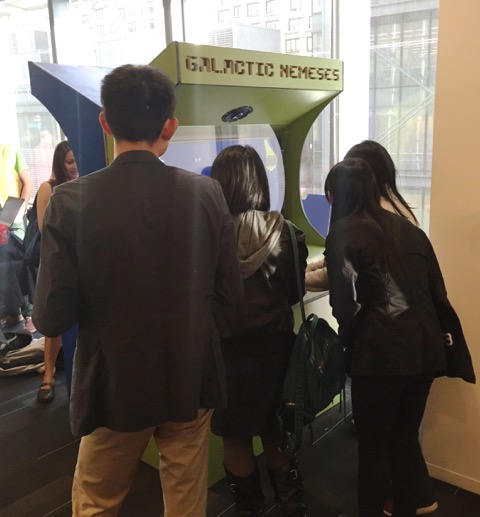